Worship where and how you will?

Worship is what you do in church isn’t it?

Worship takes place in old buildings made of stone with steeples and pews and pulpits. Everyone knows that. surely? All right, there are modern buildings, but a lot of people prefer the traditional ones. They give a sense of continuity, which is important. Anyway, you have to have a building, don’t you? It must be a properly sanctified one, not just anywhere, or you’d never get that sense of reverence that’s important. 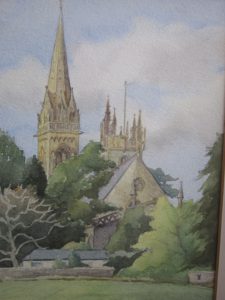 A watercolour of Llandaff Cathedral by George Dolman. A fairly traditional place of worship, 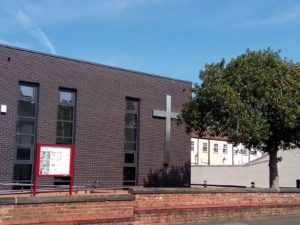 Some people have started holding services in other types of premises and even in the open air. Not everyone approves but the people who go there must prefer it to a traditional church or they would go to one.

Is worship what you DO not where you do it?

Never mind the building, worship is about following a set liturgy, including singing hymns and saying prayers. You might expect a sermon too. Nonconformists don’t conform to the Anglican format but most have something similar. However, there are some in almost all denominations that use different styles not only of music but of preaching and communicating with each other and with God. These churches generally have younger and more diverse congregations.

Why is worship controversial?

Some people have been objecting to the new approaches to worship, saying they threaten the traditional parish. They have formed a group called Save the Parish and have got the support of certain newspapers. They complain that resources should go to traditional parishes, which are often struggling, rather than to new, experimental projects. The Archbishops of Canterbury and York are concerned that the Church needs to change if it is to attract non-churchgoers, who obviously do not want traditional worship. They say there must be room for a variety of approaches, including the traditional. It is important to reach out to all kinds of people. The late Archbishop William Temple said, “The Church is the one institution that exists fot the benefit of non-members”.

What did Jesus say about worship?

He said God wanted people to worship in spirit and truth and was not too fussed about the location. He also said  “Where two or three are gathered in my name, there I am in the midst”. Apart from his words, what about his actions? He preached in the synagogue and the Temple, but also in the street, at a wedding party, by a lake, in a boat, almost anywhere. Guess where he preached the Sermon on the Mount! He preformed miracles in lots of places, but never, as far as we know, in a synagogue or the Temple. He prayed almost everywhere he went.

Where do I worship?

Usually, in St Paul’s Penketh (see photo) but I have taken part in services in cathedrals, chapels, schools, tents, and fields. During the pandemic I have joined online services from St Paul’s Penketh and from Holy Trinity Brompton. The latter are continuing to be online even now that services are taking place in the church building again. I also take part in LifeTime, an alternative form of worship at St Paul’s Penketh on Thursday mornings. A couple of dozen people enjoy LifeTime who do not come to church on Sundays. I discussed some of these issues, among other things, in my book, How to Cope with the Church, which you may find helpful. The essence is to talk to God, listen to God and meet with other Christians (and others who might not yet be Christians – you have to start somewhere).

Worship is one topic discussed.