White working-class people are suddenly in the news

White working-class people were once the bread and butter of news and current affairs. Apparently, they have been overlooking them for some time due to the emphasis on racial and other minorities. Suddenly some intrepid explorers from the media have rediscovered them by going beyond their usual haunts.

Why have white working-class people got back into fashion?

We have noticed nurses, care workers, delivery drivers, refuse collectors and others because, during lockdown, they have shown us how essential they are. Some say they are also the Red Wall of Labour voters that collapsed in the last election. Now they have become important. A recent report comments on poor performance by white children from lower-income families. It says they are worse off than most black and other ethnic groups. It criticised the term ‘white privilege’. Not long ago, another report said that how you get on in life depend on where you start and your class and locality affect your attainment more than your ethnicity.

Did the white working-class ever go away?

Am I unusual because I have always been aware of regional and class inequalities and discrimination in society? I thought the media and politicians did discuss such issues quite often. Sadly, all those words did not produce a lot of actions. Similarly, I have always believed that one reason for black and other minority people to do badly is that they tend to be poor to start with? That does not mean there is no racial discrimination. I have never doubted that some black people do succeed in life and that some black children get a better start in life than some white children. Some women are bigger than some men.

Is the white working-class the enemy of black people?

Some people interpret the report as meaning that white working-class children suffer as a result of measures to help minorities. Not everyone agrees with that interpretation but in any case it is an unhelpful approach. Can we not agree that there are two problems which afflict many people: poverty and discrimination? Surely we need to address both issues. There is no need to take sides.

Does the white working-class exist?

For a long time, many people have considered the term working class to be outdate due to the changes there have been in the nature of work. Others object to defining people according to their occupations. I agree with both those positions but for the sake of argument I am using a phrase that people can understand. To be clear: I am talking about people on low incomes. They tend to be in certain types of work. They also tend to be less well educated than better-off people.

As an author, I know words are important. That is why I doubt if the term white privilege is helpful, because it is divisive. If a white person is better off because he/she has not experienced the discrimination a black person might have, it is not necessarily their fault. The fault lies in the system (yes – institutional racism does exist – see my previous blog) and with those people in positions of power who choose to discriminate. I have also written about the term woke.

Do I write about the white working-class in my books?

I have not made class a major theme in any of my books so far. However, there is a character, Brian, in two of my Accounting for Murder series, Old Money and its sequel, New Money. He is a white lad in his late teens from a poor family. He has an interesting relationship with a young black man in New Money and becomes a suspect in what might be a hate crime. I will not give away much more of the plot, but Brian expresses politically incorrect views on race. I do not portray the black character as good and Brian as bad and I do not regard either as typical or a stereotype. Real people of all races and classes are complex and varied. That makes writing so interesting.

The cover of Old Money. A white working-class youth appears in this. 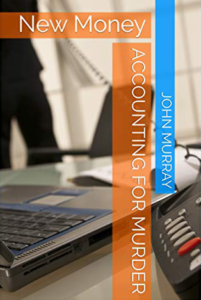 The cover of New Money. A white working-class youth features more prominently in this.