Trains are in almost everyone’s thoughts.

Trains keep coming into my mind, as do words relating to trains. I’ve put a lot of them into a report on the latest state of negotiations. I hope you find them amusing. Perhaps you preferred my previous post on the subject of Railways in Crisis or : Carry on Up the Junction?

Trains on your mind

The talks about the crisis on the railways have got nowhere because they didn’t get onto the right lines. The two sides didn’t listen to each other’s points: they just kept railing at each other until they ran out of steam. They made some cutting remarks that gave out bad signals. Sometimes it was hard to follow someone’s train of thought when they got sidetracked as people failed to guard against turning the argument into a political platform especially when some silly old buffer who seemed to think he was a big wheel said the workers needed to remember their station. Before they return to the table both sides need coaching in negotiation and must be sure not to flag if they want to engineer a solution that will deliver the goods. That would be just the ticket! 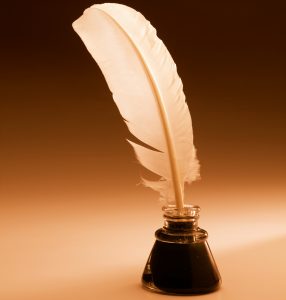 Quill pen. Many words about trains have come into everyday speech.