Scum! Is that the right word?

‘Scum’ has caused some controversy.

‘Scum’ was how Angela Rayner described the prime minister and some of his colleagues recently. The use of that word provoked some predictable reactions on both sides. Keir Starmer said it was not a word he would have used. Many would agree, but many others would use even worse language to describe this cabinet. Those who say they are shocked should get out more.

Would I use the word ‘scum’ in that context?

As a writer, I try to avoid using expletives and other kinds of foul language because there are so many more imaginative and appropriate words in the English language for almost everything, just as I try to avoid cliches. I love John Crace’s sketch column in the Guardian. He uses polite but effective words.  Another reason to refrain from using offensive language is that it often provokes a similar response and the whole argument is reduced to an exchange of insults and everyone loses sight of the actual issues. 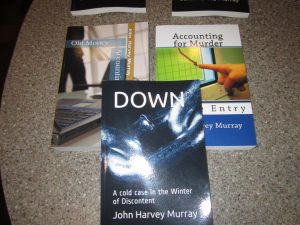 Some of my books. I rarely use words like ‘scum’ or other insults.

‘Scum’ refers to people not principles.

For all their faults (and I could give a long list) the members of the government are human beings and it is not good to dehumanise your opponents. That is what racists and other bigots do. Similarly, soldiers often use insulting names for the enemy. It’s easier to kill a ‘Hun’, ‘Commie’ or a ‘pig’ than Herr Schmidt, Comrade Ivanov or Mr Jones. Best not to wonder whether that man had a family or what he did before he joined the army. The real debate should be about policies and principles rather than individuals. I remember when many people spoke badly about every aspect of Margaret Thatcher’s character. David Steel, the then leader of the liberals, said of her, ‘ I don’t intend to comment on her integrity or her personality. She is just plain WRONG!’

Why did Angela call them ‘scum’?

She said the PM is a ‘misogynist, homophobic, racist’. I think she implied the rest of the cabinet were too. These are serious allegations, but Angela claims she based her opinion on things they are on record as saying and writing. Mostly, things Boris Johnson wrote when he was a journalist. Many people would say that those things make a serious indictment.

Do I agree with the sentiment if not the word ‘scum’?

I have heard many comments from people who know the PM to convince me that he has difficulty treating women as his equal in any sense. As to his homophobia or otherwise: I have no idea. You may be surprised that I do not believe he is a racist. I know he has made racist remarks. However, I do not believe they represent his true beliefs or attitude, any more than I believe his promises. I think he says things that will further his career, win him votes or gain the support of certain newspapers. Someone once said that Boris was never untrue to his principles, because he never had any. In a way, that is worse than being a racist.

What word would I have used instead of ‘scum’?

That’s a hard one! So many words would be appropriate, but no one word quite encompasses the sentiment I would like to express. Here’s a few.

None of the above describe the man’s abilities or those of his colleagues. That would require another blog. Or perhaps not.

Should Angela apologise for using the word ‘scum’?

She had the right idea but could have expressed it better. If she wants a speechwriter – I’m available! Other

wise I might draw on the cabinet for inspiration for the villains in my next novels. I wrote about the creation of villains in fiction in a previous post.