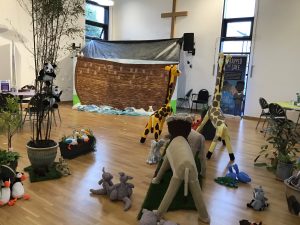 When did Noah’s Ark appear in Penketh?

I announced it in a previous blog post, but people had planned it for the October of that year,. However, the delay in lifting Covid restrictions put it back to May 2021, then July and again until late September. Unexpectedly, the ongoing crisis made the story more relevant than ever. The delays also had the benefit of allowing time for the project to be tweaked, for more of the hundreds of animals and birds to be knitted and for more people to get involved. 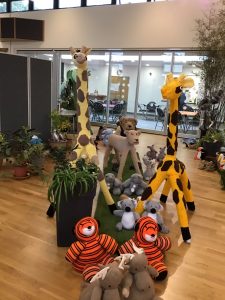 One reason for the project’s success was the involvement of so many people. A couple of dozen played a part in showing visitors around and explaining the seven stages and the exhibits, but many more helped make them and contributed in other ways behind the scenes. The end result was bigger and better than anyone had imagined: 349 adults and 455 children visited the Ark over six days, including school groups, Beavers and Cubs. Many people were amazed at the creativity on display. One visitor, Stephanie, said, “It was beautiful and inspiring, for all ages. I admire all the work that has gone into this. It was so uplifting at a depressing time.” Others commented on the balance between the child-friendly activities and the thought-provoking questions for adults. Some noted that Bible stories can be enjoyable and relevant if presented well, which point has been well taken by members of the church. 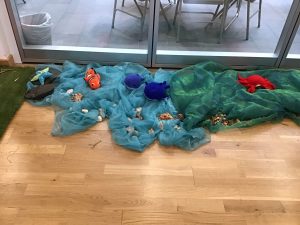 Even sea creatures got into Noah’s Ark!