Make History History? Why? How?

There has been a lot of controversy about the teaching of history and the preserving of national myths and monuments. This sketch is my contribution to the debate.

Prime Minister [Sid James]: Cor blimey! What a relief! We got through the local elections and the Queen’s speech and now we’re getting over this cornervirus thing. I was that worried about Hartlepool, I thought we’d ’ave to shift the border and make it part of Scotland. We’ll be better off once we get rid of that lot. That bolshy piece that thinks she’s in charge up there don’t know what a favour she’s doing us. Anyway, life should be a bed of roses pretty soon.

PM’s partner [Babs W]: Did you say roses? How romantic! You ’ven’t done nuffing like that for ages. Not since you bought me that little dog that everyone loves.

Special Advisor [Kenneth Williams]: Mmm… yes… have you ever fallen into a bed of roses? I think you’ll find it’s far from comfortable. By the way, how are the roses doing?

PM’s partner: they’ve all died off in our garden. The gardener says all that new pesticide we’re using that was banned in the EU has killed off all the bees and things as well as the greenfly. He says it’s not good for his green fingers either.

PM: Don’t keep going on about green! One black spot on the map now is Bristol, where the greens have taken over.

Sp Ad : Yes, Prime Minister. I think you’ll find a few unpleasant things on the horizon. Life’s not quite all roses yet. The enquiry into our handling of the pandemic could dig up a few things. And ‘that cornervirus thing’ isn’t dead yet. The new strain from India’s causing trouble.

PM: Anything from India IS a strain and always causes trouble. Old Winston was right. I wish people would stop knocking him. Who let the BBC make that recent series? Disgusting! Picking on all his faults and mistakes. Strewth! He was only human, like the rest of us.

Sp Ad: Actually, Prime Minister, it was Channel Five. But at least they didn’t mention any of his peccadillos.

PM: I should think not! Who cares what sort of pets he kept? And I don’t care who it was. People shouldn’t be allowed to rewrite history like that. And the way they attack statues! They’ll want us to take down Nelson’s Column next if some smart Alec finds out all about him.

PM’s partner: I think they should put up a statue of Lady Hamilton. She showed ’ow a girl can rise to the top from ’umble origins, just like me.

PM lets out a dirty laugh: Yeah! She did it just like you. But what about all the PC bollocks we were talking about?

Sp Ad: I think I have something that will help with that. Abolish history!

Sp Ad: Well, if we stop schools and universities teaching it and ban history programmes on TV people will only have what we say to go on.

PM: Cor blimey! What a stroke of genius! Why didn’t I think of it? I think I’ll say I did.

PM: So all we’ll ’ave to worry about is the enquiry they’re gonna start sometime.

Sp Ad: By the time it comes out, everything in it will be history. Nobody will be allowed to study it. We’ll publish our version and that will be the official one.

If you think history should be consigned to the past, think again! Try reading my book Be Victorious! lessons from World War I for business and everyday life. It shows how we can learn from and benefit from a study of the past. 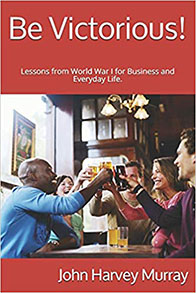 The cover of Be Victorious! Lessons from History for today

I have written a few others recently in similar style. Carry on Prime Minister.

and A Fishy Tale

Any feedback on any of these will be welcome – use Comments or the Contact form on the website or e-mail john@johnharveymurray.co.uk