The last Enemy: the BBC

The BBC may be the last enemy of the Conservative Party, according to some. Recent events have played well for the enemies of the corporation. Here’s a sketch about how things might have gone. Who knows?

Down with the Last Enemy: the BBC

Prime Minister [Sid James]: Cor blimey! Things ain’t ’alf looking up now. We thrashed Labour in the elections and now they’re all blaming each other. And we got the Frogs out of our waters. So we’ve really left the EU. About time. Look at the way they wouldn’t even vote for that brilliant British song sung by one of our top singers. What a shower! Corrupt and inefficient. Strewth! If there’s one thing the British people won’t stand for it’s corruption and inefficiency.

PM: I know. Sir Humphrey! I can count. Anyway, we’re winning and we’ve even thought up a way of sorting out the railways.

PM’s partner [Babs Windsor]: About time too. You never know if you’re coming or going with all them different companies and its allus someone else’s fault when you got a complaint. Dunno why nobody thought of it before.

Sir H: Actually, madam, it was Jeremy Corbyn who suggested it. Certain special advisors just adapted it and re-branded it as Tory policy instead of Labour.

PM: Nice one! You know that Corbyn was no fool. I wonder how we managed to make him look like one?

Special Advisor [Kenneth Williams]: We kept feeding scare stories to the press and the word Marxist was very useful.

Sir H: Yes. I didn’t know Corbyn was one, but I’m not quite sure what it means.

PM: Means? Who cares what it means. You don’t think I know what it means, do you? It scares the voters. That’s what matters. Anyway, that’s another success for us. And we just agreed to make history history so as to shut up all those lefties that wanna stop us claiming all our British heroes were Tories. Who else do we have to get rid of?

The Last Enemy is revealed

PM: You can say that again. Allus finding fault and giving airtime to a load of moaners. Still, I don’t suppose we can just abolish that lot, can we?

Sp Ad: Well, I’ve been thinking about that and I’ve found something useful. An old interview they obtained by deception.

PM: Cor blimey! I’ve heard of obtaining money by deception – it’s the best way – but I didn’t know it was illegal to obtain an interview by deception. Anyway, if it’s an old one, who’s gonna care how it was obtained?

Sp Ad: I refer to the famous one they did with Princess Diana.

PM: Cor! Was that faked?

Sp Ad: Not exactly. I’m pretty sure she only said what she wanted to say, even if she was prompted a bit. It’s just that that Martin Bashir used deceit to persuade her to do it at all.

PM’s partner: I’ve been looking at that interview and some other stuff the BBC did about Diana. Cor! She was quite a girl. Sticking it to the Royal family and having loads of lovers and for a skinny piece, she couldn’t half score with the blokes! A rugger bugger, a Guards officer, and even that Dozy al Harrod was all right.

Sir H: I think the men would say they scored with her not vice versa.

PM’s partner: That’s not what it looks like to me. She even made them all look right plonkers when she dumped ’em.

How to deal with the Last Enemy

PM: All right! But where’s this getting us? What if they sack this Marty Basher fellow? So what?

Sp Ad: It’s better than that. We can make a fuss about the way the BBC failed to investigate it properly before and suggest it led to the breakup of her marriage and finally to her death.

Sir H: I think that would be quite a stretch. Her marriage was pretty much over before that interview. That was one of the most explosive revelations in it and her death was an accident.

PM’s partner: Yeah. And I thought you were quite pleased about the way it shook up the Royal Family. Stuck up lot.

PM: I know! It doesn’t matter what we think – it’s what the public will think once our friends in Fleet Street have got to work on it.

Sp Ad: Exactly, Prime Minister. I’ve already started feeding them some ideas. Via my usual anonymous channels, of course. With a bit of luck we can use this to get away with abolishing the licence fee and tightening our control over their programme contents.

Sir H: Be careful! We don’t want to lose all the educational and informative stuff they make.

Sp Ad: We want to stop some of their investigative journalism, exposing corruption and incompetence, not only in government, but also in some of the organisations our friends are running and making money out of. Money that finds its way into the party or even closer to us.

PM’s partner: What about all the wildlife programmes? They’re great.

PM: I wish they’d stop going on about climate change and pollution, because that upsets a lot of our friends.

Sir H: But you’ve been promising to tackle those issues anyway.

PM: Promising! That’ll do. We don’t need to go overboard, do we?

All: No Prime Minister! 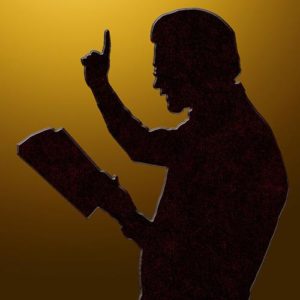 An orator denouncing the last enemy: the BBC

Note: If you are concerned about being misled, whether by the BBC or the government, perhaps you should read my book: How to Avoid Being Misled by Statistics. 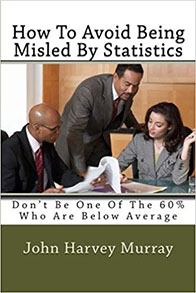