The Russians, Our Allies

When were the Russians our Allies?

The Russians were our allies in both World Wars. There is an account of an incident involving some of them in the diary of my father-in-law, Bert Mathers, covering his time as a prisoner of war. I published the whole diary recently, entitled Came The Dawn. This incident occurred in April 1945, not long before the allied victory. It shows how the Nazis treated the Russians, our allies. Elsewhere, Bert explains that the Soviet Union had not signed the Geneva Convention, which gave some benefits to British and other Allied prisoners of war. I could say a lot about this incident, but I would rather you develop your own thoughts and feelings as you read it. I related how Bert came to be captured at the Battle of Monte Cassino in a recent post.

This morning I had the occasion to witness a most extraordinary and almost unbelievable scene, one which had to be seen to really grasp the full meaning, one which cannot fully and clearly be put into words to convey the correct impression. One hears of atrocities in prison camp. Yes! And in most cases the truth of the reports is not doubted. But it always seems so far away and the significance of the thing is not grasped.

While out on patrol with a wood-collecting (a privilege which has only been permitted during the last few days, in spite of the fact that we have been without fuel for months and have found it necessary to remove all latrine doors, windows, barrack floors etc) I came upon a column of Russian prisoners being removed further to the rear.  There were two or three hundred of them. One could hardly call them men: their condition was such that they were almost inhuman. Never before did I realise human beings could suffer to that extent and still live. Eyes bulging and cheek-bones protruding. Cheeks sunk and hollowed out. Emaciated, disease-ridden, in rags and tatters – starving. Every step was more than an effort – the column speed could have been no more than two or three kilometres a day – trudging feet, a mass of stinking rotten humanity.  The German guards were old – they too were weary – were shouting and screaming in rage in their attempts to keep the column moving.

I was smoking a cigarette at the time. There were immediate requests for ‘zigaretten’. I took my cigarette from my lips and scarcely had my hand left my mouth when a dozen pairs of hands made a grab. I doubt if the ‘lucky’ recipient managed to smoke it for the clawing and grabbing of his comrades. Unfortunately, instead of taking a warning from their inhuman attitude and conduct, I brought out a cocoa tin containing twenty or thirty cigarettes, with the intention of giving one here and one there. All this time, I was walking past the column in the opposite direction. As soon as I produced the tin, there was a mad dive and scramble: hands clutching, grabbing, scratching and snatching. I found myself in the midst of those one-time human beings. The tin was knocked out of my hand and a mad fight went on for the contents, which were scattered on the ground. The German guards were shouting and storming in an attempt to keep order (or to restore order) out of the confusion and rabble which I had created and was responsible for in my ignorance. I was left holding the cocoa tin lid and, during the scramble on the floor, managed to break away from the mob. One individual made a grab even for the tin lid I was carrying. I don’t suppose he knew what it was. He possibly could only see that I had ‘something’ in my hand. Anyway, he just about took the ends of my fingers off in his mad snatch. A number of them spoke good English. It seemed difficult, seeing them in their present condition, to realise that many of them must have been gentlemen held in high esteem in their respective positions before this bloody war. Their voices were hoarse, weak. There was something inhuman about their voices even. At the end of the column were several walking between two comrades, hands and arms across their shoulders for support, literally being carried, although the carriers were hardly strong enough to even walk themselves. Some were laid out flat by the roadside, completely unconscious. The guards were raving and attempting to get others to pull the unconscious ones along but with no success. They were almost all too far gone to help themselves, let alone others. How the unconscious fared I know not, for I passed on as quickly as possible, but when at a distance of a quarter of a mile away I could hear one particular guard screaming in rage, I took it that he was meeting with little success on his attempts to get them on.

These Russians are the ones the Germans have a good reason to keep as long as possible, or as an alternative do away with, for they are evidence of the atrocities committed: of the brutality, starvation and exposure which has been their lot these past years. These things which were once human beings will never be men again. They will remain something apart from Man, as something which has been created out of brutality, cold-bloodedness, sadism. After witnessing these spectacles one is left with the impression that with our all, we have still, those who are left, given little to rid the world of these Nazi hounds. What we have given – it has been more than worth it. Of our less fortunate comrades who have lost their lives in this mad struggle – they have paid the heaviest price of all. We who are left live in the conviction that they did not lay down their lives in vain. We live on with the intention that theirs will be done.

[Written in Stalag VII, Moosburg, Germany, about midnight on the 26th April 1945 while hoping and waiting for relief by Allied troops.] 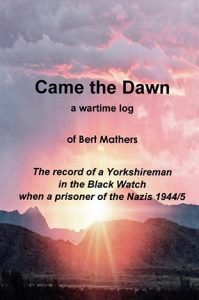